I joined Athabasca University in 2008 as Assistant Professor of History at the Centre for Global and Social Analysis. I co-ordinate and tutor several Distance Education courses on ancient, medieval and early modern Europe—that is, up to about 1700 CE.

My work focuses on the Latin books written to educate friars and other priests across Europe in their duties of preaching and hearing confessions, especially in the thirteenth and fourteenth centuries. These often dry texts interest me because they can reveal the thoughts, hopes, and feelings of medieval people. My dissertation and subsequent research has focused on anger, one of the Seven Deadly sins. This topic touches upon the history of violence, conflict and reconciliation, as well as medieval psychological and medical theories.

I live peaceably in Edmonton, Alberta.

"God's Wrath against the Wrathful in Medieval Mendicant Preaching,"Canadian Journal of History/Annals canadiennes d'histoire 43, no. 2 (2008): 217-26.

"Questions Concerning the Jews: Proposals from the Secretariat for the Promotion of the Unity of Christians," in Michael Attridge, ed., Jews and Catholics Together: Celebrating the Legacy of Nostra Aetate. (Ottawa: Novalis, 2007): 166-176. 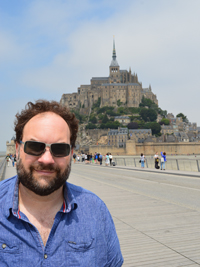